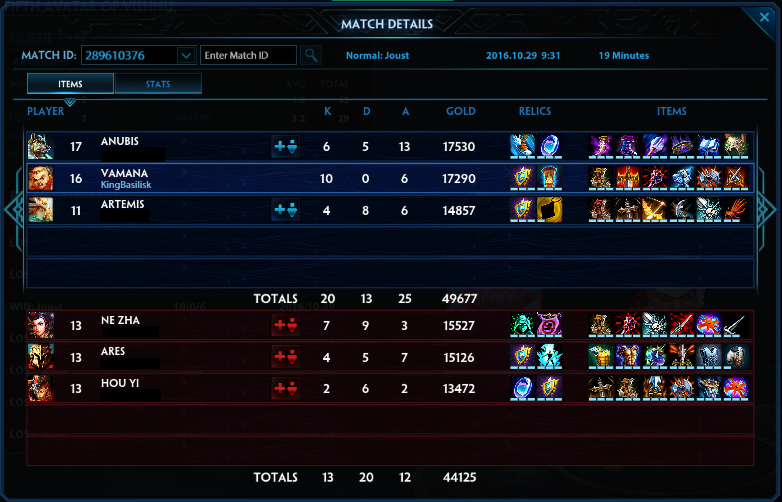 Warriors are the all around type classes. They can deal decent damage. They have a medium amount of protections. When playing a warrior in a game of Joust you fill in for a guardian. If you play a warrior in Joust the standard team composition would be you, the warrior, a hunter for the range and carry, and a mage for magical damage.

How to build warriors

When building a warrior defensively you should buy items to increase health and protections with special effects. These effects are passives that help you in a fight. Defensive warriors replace guardians, so protections are good because you will do the guardians job: shielding your team-mates.

Items to use For warriors in joust8

Good items to use when building a warrior defensively are:

Offensive building can help a team push your lane. This is great because it leads to more tower damage because your minions are more in their territory than theirs, so they can’t block tower damage until they kill all of you. Aggressive warriors do this if they do well because they are the front line, so usually attacking the minions the most. Aggressive built warriors deal more damage, so their minions will be gone faster than theirs.

Items that are the most beneficial to use on an aggressive warrior include:

Playing a warrior is very different from playing other classes. With the rest of the classes, you have specific roles: Assassins wait until a good time to burst the enemies down, hunters are the main damage, guardians are the main tanks, mages are the back line fighters.

Warriors are a little bit like guardians, as in tanky. However, because they aren’t as tanky as the guardian class, you don’t want to stay in the front line as much as them. You want to move in the front line until you have a good opportunity to crowd control (cc) or bring the enemy in a position that your team mates can attack them. A good example of this is Tyr. Tyr’s assault stance’s first ability is a moment ability that brings enemies with you. You would wait in your guard stance until the time is right, dash through the enemy front liner, and bring the enemy mage or hunter into your team.