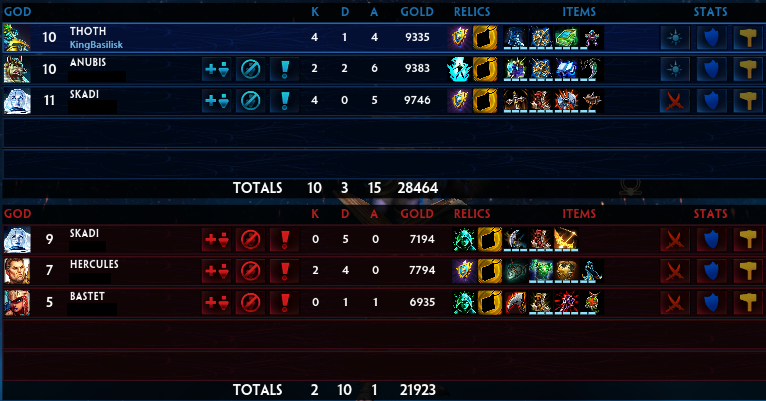 Thoth, the new God released in patch 3.21, is a mage. Mages are ranged attackers, with magical type damage. He is a high damaging, ability based God. Has great clear and a good escape, but that takes a while to get used to.

Thoth’s passive ability is Dead Reckoning, it is unique, because it is similar to a stacking item but it’s an ability. It gives you a “book” for killing thirty enemies. Each “book” or stack gives you four magical penetration for a maximum of five stacks, or twenty magical penetration.

I love this ability. I like how it allows you to skip a penetration item, when on another mage you would have to an item for the pen. Thoth gets to skip it. The passive also is good because it gives you more penetration with items such as obsidian shard instead of just pen boots.

Before I tell you about his other abilities, it would be best to learn about Thoth’s third ability, Glyph of Pain.

Thoth’s Third ability, Glyph of Pain, is a kind of wall, it can be walked through, but if you go through the glyph, your abilities gain additional effects. Mainly increased range. This ability also gives your basic attacks more damage.

Thoth’s second ability, Evade and Punish, is his escape. The ability is like Rama’s dash: You go in what direction you are traveling, and your next basic attack gets more effects. Since this ability has such a long cooldown (eighteen seconds at all levels) you want to use it sparingly, and make sure to basic attack the enemy afterwords to not waste the extra damage and the slow. If you use this ability into Thoth’s three, you get more range (thirty to his original fifty five).

Thoth’s ultimate, Final Judgement, is a high damaging long range ability. It has a pretty long charge on it, but you can release and cancel this ability early. It gains an increased range when you hit it through your third ability, Glyph of Pain.

You want to level your abilities to their effectiveness, you shouldn’t level Glyph of Pain first, because it increases your other abilities effects, it’s not that good on it’s own. You should level your first ability, Hieroglyphic Assault first because of the damage and clearing potential. Then you have a choice between his dash or extra damage. I leave this choice up to how well I am doing: If I am ahead, I get the three. However, if I am getting caught out and punished for not being able to escape, getting your second ability is probably the better option. After the third level, you should level the one again for that extra damage. Later on it’s more situational. Upgrade the three if your ADC is carrying well, upgrade the two if you want to help your team have easy kills because of it’s slow (the slow becomes more potent the more you upgrade it), and your one for your clear and damage.

Thoth is a easy God just to pick up and play due to his escape’s range and the high damage at high range. However, even though he just came out, his *skill cap is extraordinarily high. His three is a huge part of Thoth’s kit, and it is hard to know exactly where to put it for it’s maximum effect.

I also just really like how Hi-Rez made Thoth VERY unique. I love the originality with his kit and how they interact with each other.

*Skill cap is how high your skill can be with that God, a high skill cap god (like Ullr) has a huge gap between the skill of a person who plays Thoth good, and a person who understands Thoth’s kit and everything to know. Basically, the size of skill gap.